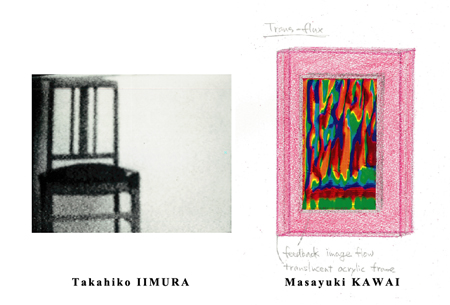 
Out of Frame
MORI YU GALLERY Kyoto is pleased to present two persons show, Out of Frame, by internationally reputable artists, Takahiko Iimura (b.1937) and Masayuki Kawai (b.1972) from July 13th to September 1st.

The exhibition is based on their thoughts on the aesthetic theories exchanged between them for more than 20 years, which have strengthened he works of both artists with aesthetic intensity.

Camera, Monitor, Frame (1976) is the central work of Iimura’s experiments in the 70’s on the conceptualism of video art. Kawai elucidates in his recent book its video-specific structure of feedback, which takes in spectators’ gazes and desires to look/be looked at, breaks out of its own frame that bridges subjectivity and objectivity, and then alternate between transcendence and immanence.

Iimura’s A Chair (1970) is probably the first video-taped work in Japan, meanwhile a significant response to Joseph Kosuth’s One and Three Chairs (1965) made by video art. In this work, Iimura uses film projection to flicker the shadow of a chair shot by a video camera. Although the shadow functions as the chair’s index, its constant flickering suspends it from any narrative and brings about a fertile non-meaningness.

For this exhibition, IImura has revised and restructured this work after almost half a century since its birth, as an installation piece A Chair and the Projected (2019).

According to Kawai’s aesthetic theory, video is neither a tool for information/communication nor independent object such as representation or text. He claims that there exists nothing but the continuity of an act: which he calls as ’data’. Data is not immanent and physical, but that does not make it transcendent and theological either; in other words data belongs to neither logical assertion nor theological revelation. In terms of Kawai’s concept of “feedback”, it collects a variety of indefinite factors, connects and disconnects immanence and transcendence and continues to deviate within the infinitely diverse circulation loop. Kawai applies this data feedback theory to every aspect in the world where data interpenetrates both the organic and the inorganic.

Kawai’s latest series Trans-flux (2019) shows a new direction that he took from his iconic Video Feedback series. In these pieces, he explores the concept of ‘translucent’, which represents the characteristic of data as a connector/ disconnector between immanence and transcendence. In the translucent color plexiglass frames, abstract and vivid images made by analog free-running electronic data perpetually flow and transform; hence the data / media manifests itself as a quasi-object, which never ceases to generate the non-meaningness in between.